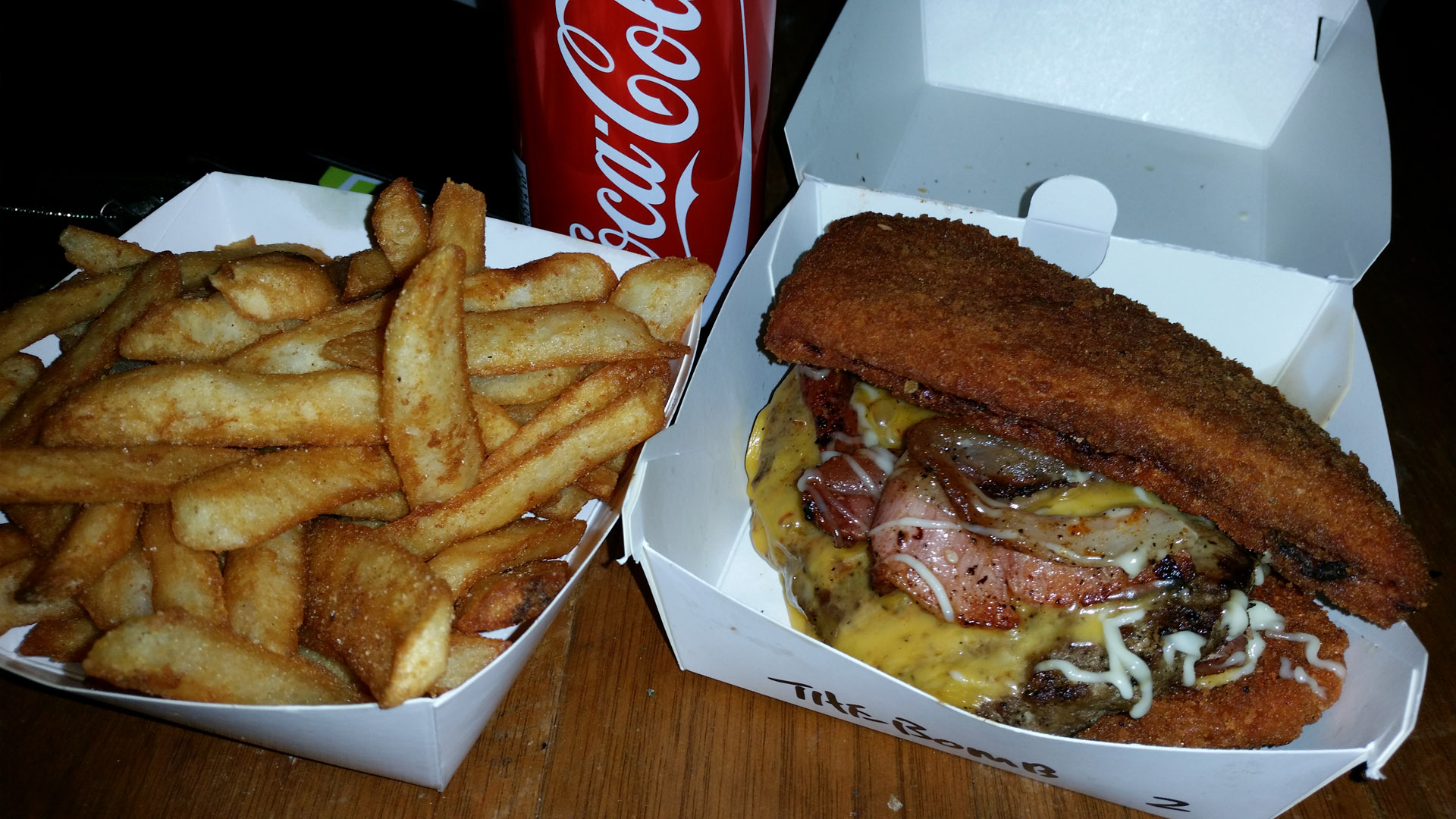 So since my last article, where I discovered the burger restaurant store Yo My Goodness / YOMG in Glen Waverley (All other YOMG stores only do ice cream / yoghurt and shakes), and put forward my recommendation for the best after hours burger in Melbourne (Embassy Cafe in Spencer Street), I have been around a few more restaurants to try out some of their burgers.

All the burgers in this article come from stores with fairly normal opening hours, from about 11am in the morning to around 10pm – midnight. Each store’s hours are different so ensure you check their hours in google or via their websites before heading down.

After we found YOMG burgers to be inconsistent at times, I looked up a few more burger shops with high ratings online, and proceeded to try out one burger on the menu from each of them, today I will review the 4 others I have visited so far.

Unfortunately I didn’t get a photo of the burgers at Heroes.

Heard a lot of good reviews about this place so myself, my friend and his son came along with me to try them out. I ended up getting a Classic Beef burger, which consisted of a beef patty, double cheese, pickles, American mustard, house BBQ sauce and tomato sauce, to this I added Bacon and a piece of their southern style chicken. My friend ordered the Big Beef burger which consisted of double beef patties, double cheese, tomato, lettuce, hero sauce, pickles and American mustard.

The burgers size was big, but managed to figure out the best way to eat it, while it was extremely filling, I found the chicken itself to be fairly dry inside and lacking taste, unfortunately the beef too was very thick, but all the moisture had been drawn out and along with this the meat only tasted of meat, there was no seasoning in the beef patty itself. Normally flavouring in the beef mince isn’t that important as long as you have quality beef and keep the patty fairly thin height wise, but for this it was a bit too thick and ended up tasting of chewing a big lump of cooked mince. My friend agreed his burger was exactly the same. In terms of size, neither of us could finish our burgers, we got about 95% of the way through then were too full to continue.

We also ordered milkshakes which we both agreed were nothing special, their cookies and cream milkshake seemed to be just chocolate milk with an oreo added, we were expecting something we couldn’t make ourselves at home, but all in all we could have made some comparable or better burgers and shakes with some ingredients from the supermarket and an hour or two at home.

If you enjoy big heavy meat on burgers however this place might suit you, and their in house baked bread rolls used for the burgers were decent, it seemed quite busy when we went, mainly a lot of teenagers but a few adults there too. 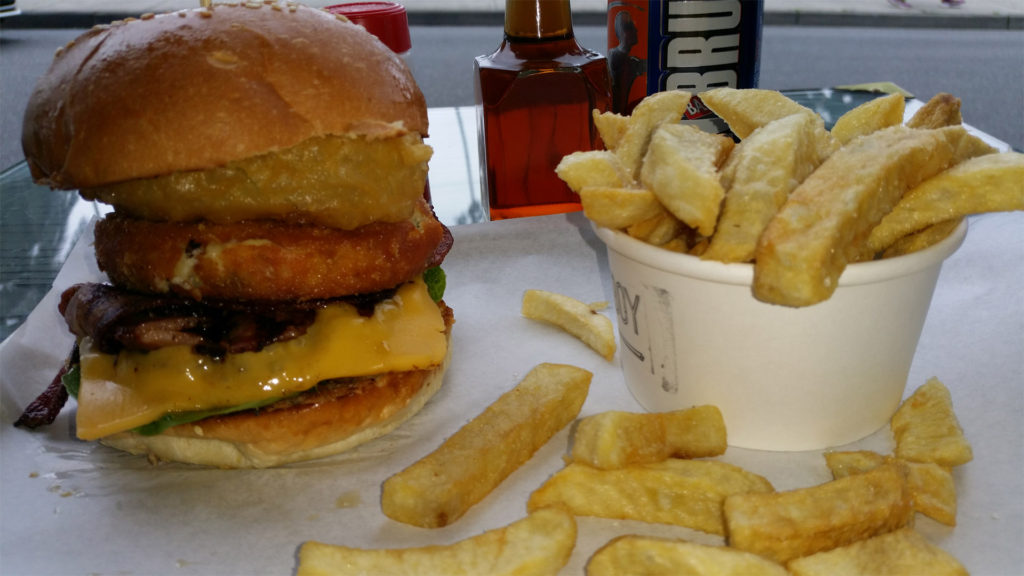 Recommended by a friend, I headed down to St Kilda to try out one of Mammy’s Boy burgers. The burger I got is called Daddy’s Boy, it contains a single beef patty, bacon, a battered onion ring, cheddar cheese, lettuce and Ballymaloe relish (popular Irish relish). To this I added a Mac and Cheese patty, which is actual macaroni and cheese pressed together and then lightly battered.

The meat on the burger was quality, as was the cheese and bacon, the onion ring and mac+cheese patty were filling, if you are a huge fan of deep fried battered fish and chips you would probably appreciate both of them, for me though it was a bit much, and seemed to take away from the taste of the meat, but was still a nice burger and something different.

Next time I visit I will be going with the Daddy’s boy, except without the onion ring and not including the mac+cheese patty, instead I will get the burger with double meat, double cheese and double bacon, which if you are keen on meaty burgers should be a quality choice.

The burger I had this time was easy to eat, I could have gone another beef patty and it probably would have hit my limits, the battered onion ring and the mac+cheese patty is very easy to eat, and doesn’t fill you up as much as another meat patty would, hence the plan to swap it around next time.

I got the burger with chips and a canned drink for $5 extra, IRN BRU even though it was the version made for Australia that is imported from Scotland, still went well with the meal. I have a bit of love for the actual Scottish IRN BRU however, I believe the quinine and caffeine make all the difference, but it is fairly rare to find here in Australia compared to the non caffeinated and non quinine version the Scots make for us, due to local Australian demand.

They also sell a wide range of Irish, Scottish and English foods in store, and while known for their burgers, they are actually a fish and chip shop which does things in a manner similar to Ireland and the UK. For example, instead of Tartare / Tartar Sauce, in the UK and Ireland they dip the fish into what is called mushy peas, they are a hulled pea, blended with cream, butter, salt and pepper. This shop has mushy peas available as a side fairly cheap, and I’ve been told their side of coleslaw is one of the best things on the menu.

One thing a little disappointing was that they don’t do milkshakes, but the burgers and concept of the store are definitely good enough to forgive this. 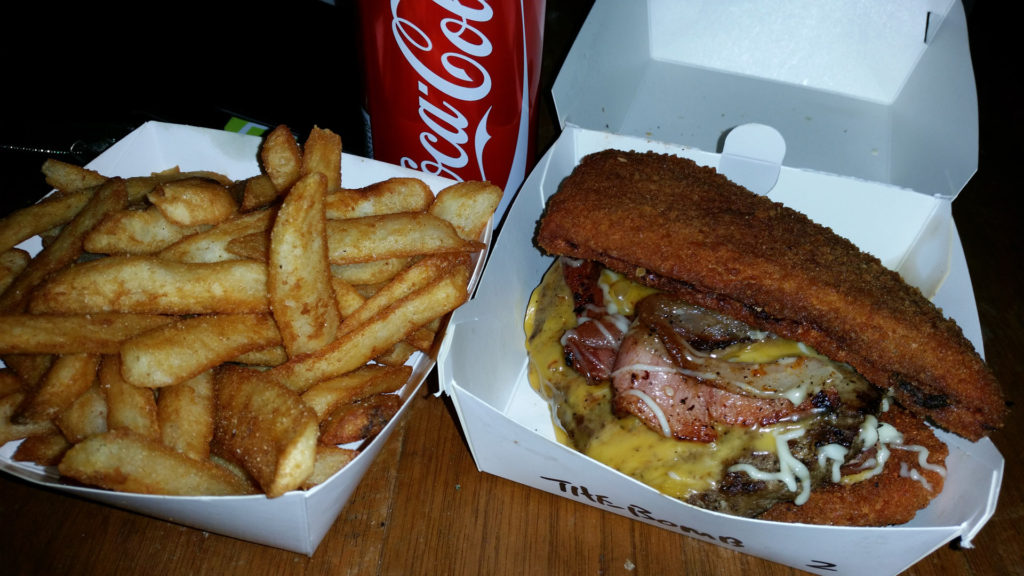 Myself and a friend headed over to JD’s Burgers, which have their signature Asian Fusion style of Beef. We both decided to try the Goku’s Spirit Bomb Burger, this burger has a single beef patty, cheese and bacon, and instead of the bun they use two pieces of chicken. I have to say the beef here tasted really good, the mix of whatever they put in there is quality and a nice change from regular standard meat used at other burger places. The beef was cooked perfectly and the cheese and bacon was quality too.

One thing that disappointed both of us however was the chicken they used instead of the bun, we expected to find a freshly filleted and crumbed or mildly battered thin chicken breast, however what the burger had was what seemed to be 2 x mass produced chicken schnitzel pieces which were deep fried, they didn’t look or taste like fresh chicken, it was similar to frozen or mass produced schnitzel’s found in supermarkets. This in our opinion ruined the burger, and the fact at home it takes me only a couple of minutes to butterfly a chicken breast into a few pieces, roll it in some egg and white flour, then deep fry, combined with the price of this burger, they really should have done this properly in house.

I have no doubt this place has some promising burgers, but unfortunately we chose one that was all promise and ended up with us feeling ripped off, we will be back but won’t be going near this burger again, without a doubt the other more regular style burgers with bread buns would be high quality from here, and there is a large menu to go through and choose from. Their chips however were high quality and tasted great, seasoned and crispy.

Again this place does not do milkshakes which I feel is required of most burger joints, but I wouldn’t discount this from going there as the beef was quality, and there is no doubt some gold items in the menu waiting to be found.

In our next article, we will feature burgers from Cultural Commons in Springvale, and Demazzi’s Stone Grill in Essendon.