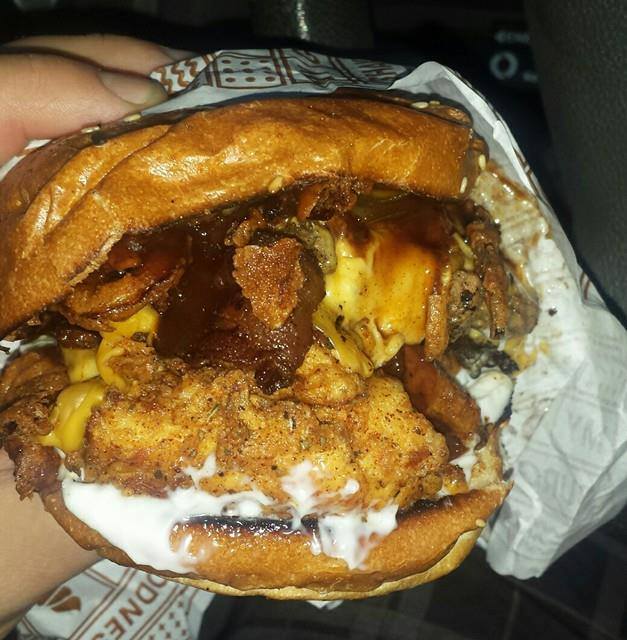 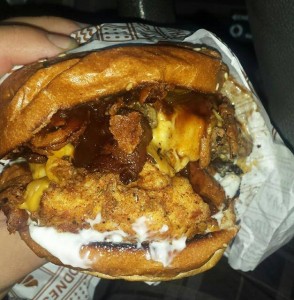 “The Muffler” from YOMG Glen Waverley.

My friends brother is an admin on a Facebook page that is quickly gaining popularity throughout Melbourne, the page is called Melbourne Burger Fanatics . After being invited to join at the beginning, it was good reading up about the types of burgers that are quickly taking over Melbourne, so many new restaurants are opening up, and the people of Melbourne are quickly adopting the new trend. Although some are quite pricey, the quality of many makes up for this.

I was always a fan of great burgers, however often rated 2am burgers at Embassy Taxi Cafe as some of Melbourne’s best. If you are after a traditional burger and work night shift, Embassy is a great place to eat, their chips are often decent too, as are their milkshakes, and it costs about $20 for a double beef / double cheese burger with bacon, along with chips and a milkshake. Not bad considering the only other options that time of night aside from China Bar in the CBD are the main fast food chains.

Recently however, one burger popped up on the facebook page that triggered an extreme interest. The burger is called “The Muffler” and is available from a new but extremely popular burger shop in Glen Waverley called “Yo My Goodness” or “YOMG” for short. This company once only catered for people looking for frozen yoghurt, ice cream or milkshakes, but the Glen Waverley store has branched out into burgers, and they are quickly taking over.

My first stop was my friends place, where I dragged him out of the house around midday on a Wednesday to try one out. We both got a Muffler burger and had a look. In basics, it is a beef burger with southern style chicken, bacon and deep fried onion. After seeing it rated as 9.2 out of 10 on the facebook page, I assumed an exaggeration, but it lived up to expectations, and the size and weight of the burger meant I struggled to finish it. The chips from there are pretty amazing too, they look almost battered and I am unsure of their secret, but they were definite quality, and their chocolate milkshakes are a little small for me, but taste 10/10. You can get all three to make an unofficial “meal” at around the $30 mark.

After the first outing, a couple of weeks later at around 9pm on a Saturday night we visited again, with another friend this time who wanted to see the hype, this time I skipped a burger as I had already been once more 3 days earlier, and was still recovering! My friend ordered another Muffler and another friend ordered a burger that was based around southern style chicken alone, I recommended trying the muffler but he was set on this one. Unfortunately the southern style chicken burger on it’s own wasn’t rated well, and I feel as though the company is beginning to cave in under the problem a lot of fast food places experience when they become extremely busy, mixing up or incorrectly processing orders. They managed to somehow mix up a Muffler burger for a regular single patty beef burger with jalapenos. How this is possible is beyond me, and aside from being short changed around $6 from the mix up, it wasn’t even properly cooked.

It is unfortunate because “The Muffler” burger itself is definitely rating a 9/10. Their other burgers appear to leave a lot to be desired, I previously tried one of their double beef burgers and have to admit they were ok, but nowhere near as good, the muffler is definitely the star on the menu, although I am yet to try “The Creeper”, which is 3 beef pattys with jalapeno jam, which looks like quality too. Should my friends be keen to visit again after the issues with the last visit, I’ll post a update on this page as to the quality of “The Creeper” burger!

For the moment however, if beef, southern style chicken and bacon is favourable to you, I highly recommend trying out the muffler at YOMG, they do get extremely busy though, so allow 20 minutes for your burger to be prepared, or place a phone order before heading down.

However, if a decent old fashioned double beef and cheese burger with bacon is favourable to you, I still feel other places are able to do a bit better, such as Embassy Taxi Cafe in the early hours of the morning, it’s worth the extra drive to skip fast food and give them a try.