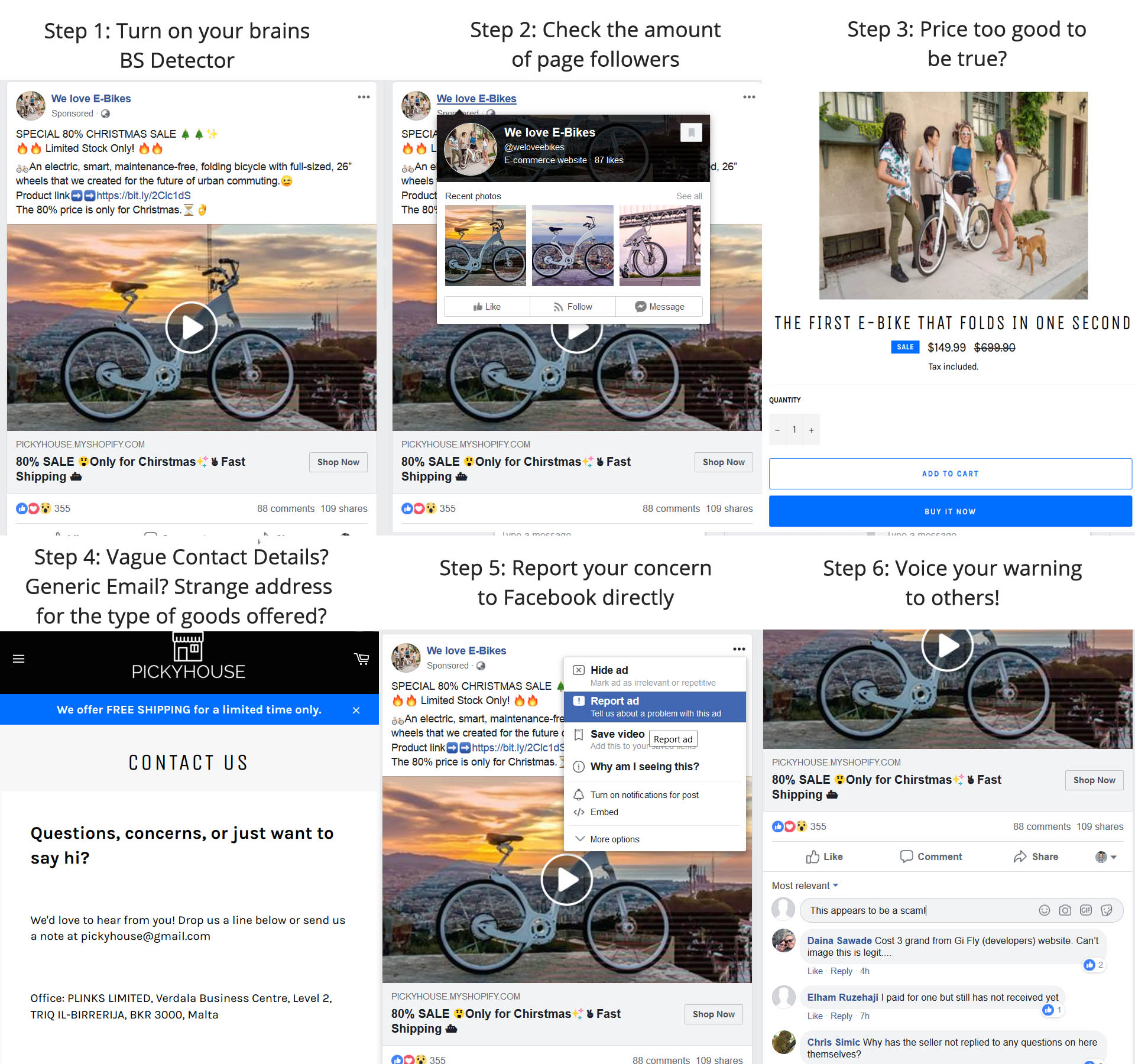 Facebook and Scammers: A deal too good to be true is best avoided

I write this to caution people who have been falling for many scams from new facebook pages advertising expensive items for a fraction of what they should cost. Before you buy anything from an advertisement on Facebook, it’s worth knowing some basics about how facebook advertising works.

Facebook advertising is a semi-regulated market, however no seller ever has to prove they actually stock the products they are offering for sale. Instead at most they may need to verify they are a legitimate business by means of providing the business registration details, however even this is not mandatory to begin a facebook advertising campaign.

What you need to do before you make a purchase from facebook, is firstly when you visit the sellers website, ask yourself is this price too low, secondly you should check the contact details on the website, ensure they have a fixed address that is in a country likely to be legitimately selling globally, an example of this is would an electronic bicycle company from Malta really be able to globally ship this product for prices that would be considered extremely cheap even if made in China. Thirdly is a phone number provided for the goods and finally is the business registered in the country you are purchasing from.

Sellers who do not provide all the above details, you should most likely avoid entirely, it’s very easy for people to slap up a quick online store using third party websites, add some fake products then proceed to push out advertisements from a new facebook page until you end up banned once facebook gets enough reports that the seller is a scam.

You should also check the page attached to the advertisement, see how many followers they have, and avoid purchasing from pages with fewer than 100 followers. Keep in mind that if the company was legitimately able to provide such items so cheap, the following should be massive on their page, not just in the facebook advertisement they paid to promote.

Beware of too good to be true items, something a lot of people have forgotten about lately, an example of this would be someone selling items such as expensive electronic-bicycles worth $4000 for prices such as $200, or large 1m width curved computer screens for $70 when in fact they are worth around $1000.

The fact is that most people who visit a facebook advertisement don’t do any background checks, and hence these scammers who are currently targeting Australia can get away with these methods.

It also doesn’t end after you have made your purchase, as scammers have found a way around the charge-back methods your banks use too. The reason they often sell for an amount you would possibly be willing to give up fighting to get back, is how they win the battle when you report this to your credit card company as a scam.

To do a charge-back on a company is fairly simple to initiate, goods not received, or goods not as described, are two methods of obtaining a charge-back initiation. However the sellers often use their local bank’s online merchant gateway or their own eftpos machine to process the payments, meaning that they will have the right to argue with your bank and their own bank that they actually fulfilled their end and your claim is wrong. While you may not be willing to argue back and forth via your bank to validate a $50 to $200 purchase, people in the countries where you actually paid this money to see these amounts as something they are willing to persue as the amount to them is worth fighting for.

The best way is proceed with caution in these matters, it’s always easier to avoid being scammed than dealing with a scam afterwards. These kind of low level scam tactics are increasingly common on social media and one should exercise a lot of caution to ensure you aren’t taken for a ride.