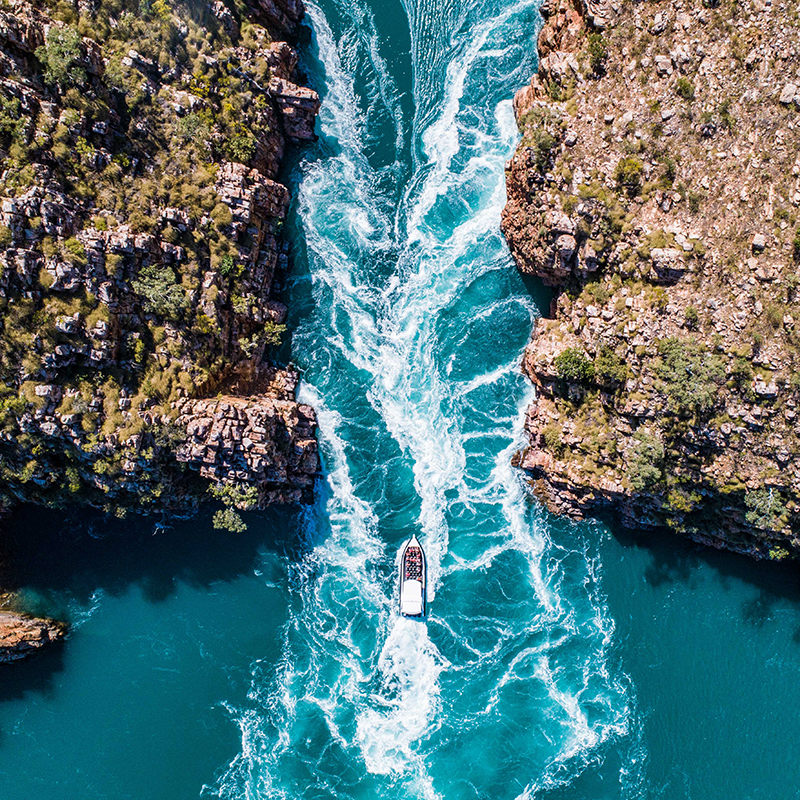 The Power Of Tides In The Kimberley﻿

Did you know that some of the largest tides on the planet are right on your doorstep in Australia?

The tidal variations along the stunning Kimberley coast in the country’s north west are among the world’s largest, measuring up to 14 metres in some places, and in the most spectacular miracle of nature in the usually calm waters of Talbot Bay, these massive swells turn into an extraordinary sideways waterfall.

Horizontal Falls is a unique phenomenon whereby millions of litres of sea water surge through two narrow parallel gaps in soaring sandstone cliffs, creating the effect of a waterfall turned on its side.  And given that the cliffs and the surrounding land are around 1.8 billion years old, when you visit this ancient area, the might of the surging tides will probably only be matched by a hugely powerful emotional response that will touch your soul.

But back to the Kimberley tides.  The ebb and flow of the massive tides are dictated by the pull of both the moon and the sun and are amplified by the shape of the coast and the unusually large and shallow continental shelf which stretches over 350 kilometres offshore.

The biggest tides in the region are experienced at King Sound near Derby, which is an extension of this wide shelf and which is shaped like a huge, shallow channel.  Because water is constrained on both sides of the channel, it gets forced up the sound, creating the dramatic tidal variations.

‘Horrie Falls’ is located in the heart of the Kimberley in Talbot Bay among the thousands of islands, bays and creeks of the Buccaneer Archipelago and can be easily accessed on a Horizontal Falls tour from Broome or Derby.

At Horizontal Falls, the sight and sensations of the strong currents and churning whirlpools are most impressive during high tide.  That’s because the sideways waterfall effect is caused by water banking up against one side of the narrow cliff passage faster than it can flow through them, with the variation being as high as four metres when the swell is at its highest.  The direction of the water flow at Horizontal Falls reverses with each tidal turn which happens approximately every six and a half hours.

David Attenborough described Horizontal Falls as ‘one of the greatest natural wonders of the world’, and if you’re planning to experience the raw power and majesty of the only sideways waterfall on the planet, then you should try and schedule your trip during high tide.

In fact, a fast boat ride through the narrow gorges and churning surges of Horizontal Falls is likely to be one of the most awe-inspiring encounters of your life, and is actually the very best way to get the full Kimberley tides experience.

But it’s all about timing.  And it’s best to talk to a professional operator who knows the region intimately in order to get recommendations on when is the best time to book your Horizontal Falls tour and when the tidal variations are likely to be at their largest.  It’s also good to know that the tourist season at Horizontal Falls generally runs from March through to October when conditions are visitor-friendly, but those times can change so it’s always best to check.

To witness the Kimberley’s incredible tides and to experience the world’s only sideways waterfall, check out Horizontal Falls Seaplane Adventures’ range of award-winning tours from Derby and Broome.

Bianca has lived in Broome for the last 5 years, she is currently entering her fourth season as the office manager for Horizontal Falls Seaplane Adventures (HFSA). A change in lifestyle and hunger for excitement brought her to Broome, originally a Perth girl. Her sense of adventure led her to a position with HFSA, where she has been helping people tick the falls off their bucket list ever since.

Bianca has lived in Broome for the last 5 years, she is currently entering her fourth season as the office manager for Horizontal Falls Seaplane Adventures (HFSA). A change in lifestyle and hunger for excitement brought her to Broome, originally a Perth girl. Her sense of adventure led her to a position with HFSA, where she has been helping people tick the falls off their bucket list ever since.