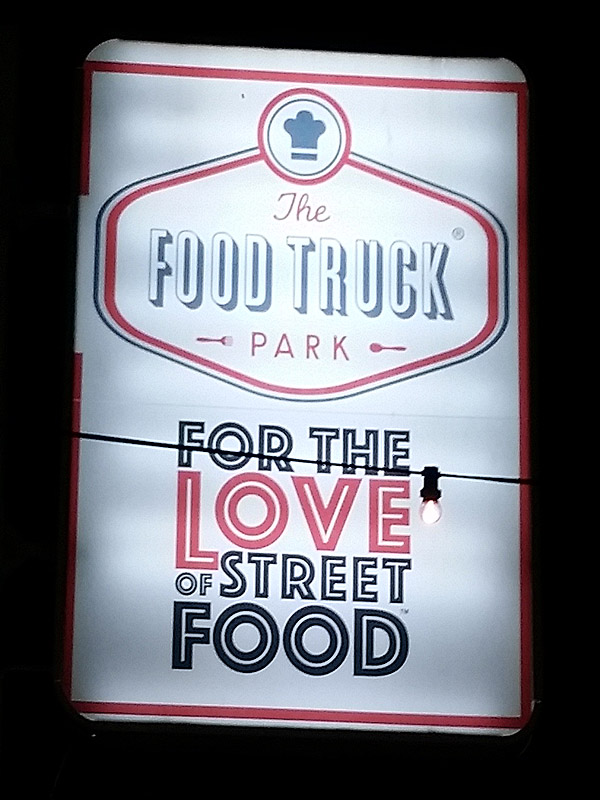 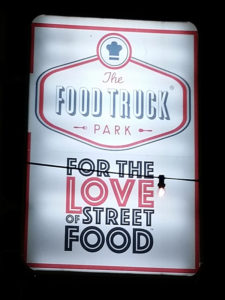 This weekend a friend introduced me to a small event at a place called The Food Truck Park, located in Preston in Melbourne’s Northern suburbs. The event was for mobile burger trucks, bringing them all together for one 3 day event.

Held over 3 days, from Friday 5pm to 10pm, Saturday Midday to 10pm, and Sunday Midday to 9:15pm, there were 12 mixed trucks with burgers / mobile cafes / ice cream / deserts / other foods.

I decided to pop down and see what it is like. 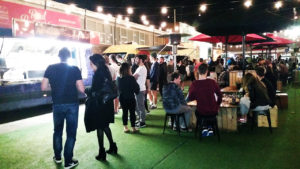 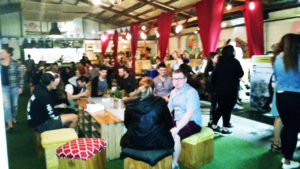 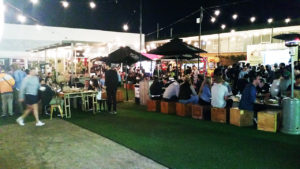 The food truck park is a small ex commercial block of land, with lots of frontage and side parking, basically there is a large outdoor area with improvised tables and seating made from old shipping pallets, around which a variety of food trucks park and set up. There is also a large shed out the back which contains the bar, which is fully licensed.

This venue caters for a variety of different food and beverage mobile trucks, with the theme changing each time. This time a variety of mobile burger shops set up and the place was very busy. Beginning at 5pm, I arrived at 8pm, I think I was one of the last arrivers, as the queues for each truck were huge, and by the time I was served I was one of the last customers remaining there, it took a long time to be served, so heading to the bar for a couple of drinks between ordering and receiving your burger is needed, unless you have a few friends to keep you entertained for the 1 to 2 hour wait between arrival and getting your burgers.

As the bar closes at 10pm, it probably would have been best to get there around 6pm or so, the queues would have been smaller and it would have provided more time to get a few drinks in, either way I stuck it out over the Friday evening, being there from 8pm to 10:30pm, even though orders ended at 10pm, it took them awhile to catch up with all the previous orders.

Trying to fit in a couple of burgers each per night, I decided to stick with single sized burgers, no doubles or anything outrageous.

Below is my review of two burger trucks: 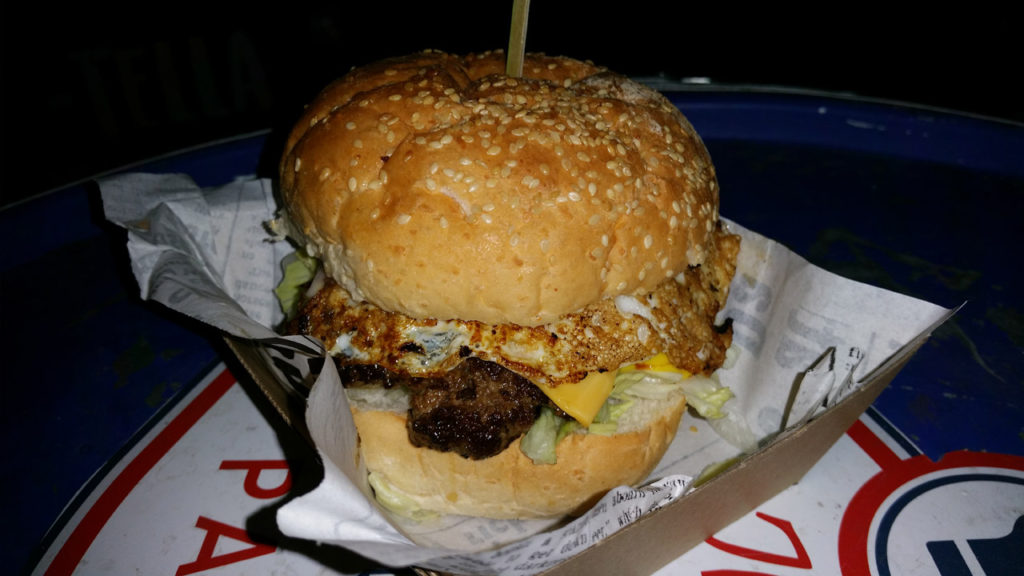 Neatly presented, and although it may not look like much from the photo, the taste was quality.

I ordered two burgers on the Friday evening from different trucks, this one was the first to arrive. The Texas Ranger burger from Real Burgers food truck, it seemed the most appealing to me from their menu, as I am not a big fan of fresh tomato based burgers, this burger contained the following: 100% beef, tasty cheese, fresh free range egg, crispy trimmed beef strip, Spanish onion, salad, mustard, ketchup, pickles & light herb mayo on a toasted buttered bun.

This was probably the second most popular truck at the event, however as the most popular truck was the only one offering ‘crispy’ bacon, I think that the majority of people were choosing the other truck simply because of the bacon alone. Even without bacon at Real Burgers, the burger itself was good quality and tasty. Reminded me a lot of a Hungry Jacks style burger, like the HJ’s whopper, but much tastier and fresh, it was easy to eat but not very filling, you would definitely need to go a double beef patty set up on this one if you were after anything that would fill you up.

The lack of bacon was made up for by the crispy trimmed beef strip, which had the texture and consistency of bacon, not a huge amount of difference, except it can be difficult to get the bacon properly cooked at places like this, so this did the job as a replacement for some good quality well cooked bacon.

If you are not a fan of burgers that leave you feeling absolutely full and tired like you have eaten a 3 course meal, and prefer a lighter burger with lots of taste, this trucks burger would definitely be the one for you. Even though I am accustomed to large extremely filling and high fat burgers, this burger was still very nice and I would rate them fairly highly for the taste aspect of the burger itself, but there is definitely room for another one or two burgers following this, if you wanted it to fill you up as a complete meal, go double on the beef / cheese and beef strips. 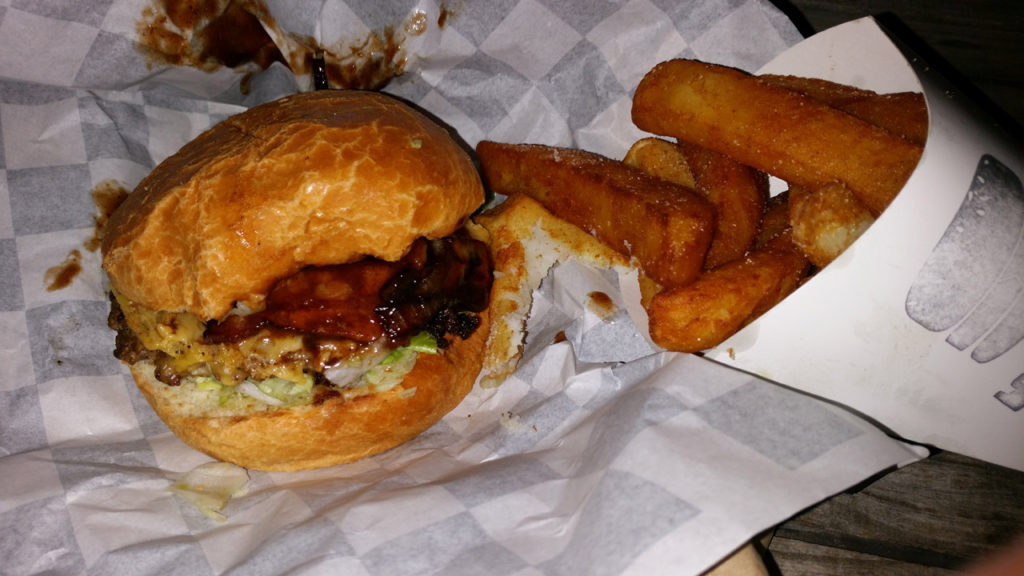 Very much an under-performer, quality levels compared to the advertised burgers photo left you wondering if this was even the same burger.

The line for this truck was huge, so even though I ordered first, it was the last to arrive, I waited in a queue of around 100 people to finally be one of the last to get my order in for this truck on the night. From Boss Burgers I ordered their burger named ‘The CEO’ (in a single beef patty variant) which contains a soft brioche bun, 160 gram beef patty, American style cheese, crispy bacon, lettuce, caramelised onion and BBQ sauce. I also ordered their beer battered chips.

The burger itself looked a little disappointing, the bacon wasn’t cooked too badly, but the burger looked soaked in BBQ sauce, without much else there to take appeal from. After tasting the burger, it was clear the BBQ sauce was overpowering everything else, there was a bit of taste of the beef and bacon, and the same for the cheese, but in all, rather disappointing, could be because they had already made another 100 of these before we got there, and hence the rush to get everyone served before closing time put pressure on the quality, but it looked nothing like the photographs of the burger they displayed, was about 1/3rd the size, and the taste was really nothing to recommend.

Overall a low quality burger. Their chips were not too bad though, extremely large, soft inside and crispy on the outside. They also do potato gems which I think would be a better option than the chips if purchasing from them again.

This truck is also known for its milkshakes, however these were not available on the Friday night when I attended. 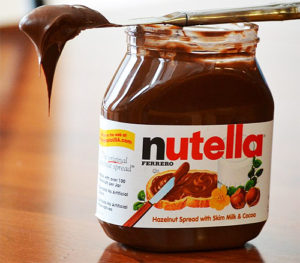 A Nutella based primary ingredient sweets / desert stall. Didn’t get a chance to try anything from this venue, however from a couple I met there on the Friday night it seems the Nutella and Strawberry jam filled donut was half decent! 😉