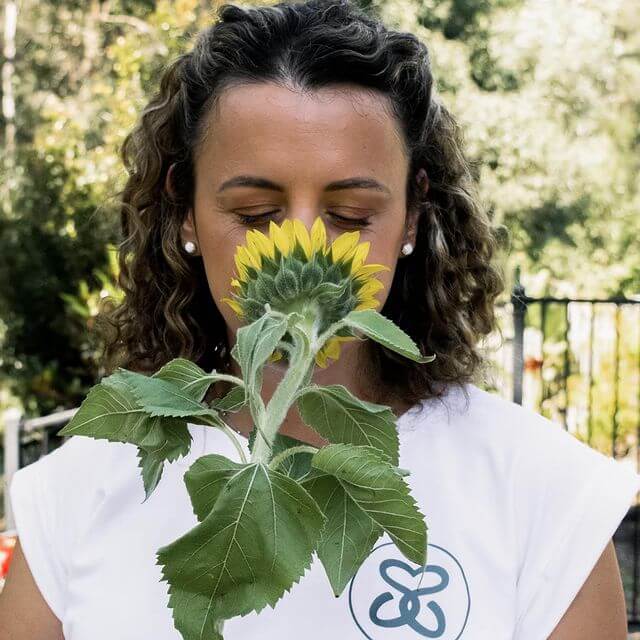 It was 2016 – I was 32 years old and a new mum to a beautiful baby boy, my husband and I had just bought our dream house on the water, our business was thriving and life was looking pretty good.

And then just like that we had the rug pulled from under us.

I was young, fit and seemingly healthy but a couple of months after I started breastfeeding something felt off. My son refused to feed from my right breast and I had so much trouble expressing to the point where I gave it up and switched to a bottle. The first time I found a lump my son was 3 months old.  The doctor said it was a blocked duct and I didn’t need to worry about it. It took three doctor visits, my strong intuition and a second opinion just to get a biopsy and even then, I was told, “Don’t worry you are too young to have cancer”.

I never thought that 3 little words had the power to change my life forever, the words “You have cancer” echoed in my ears over and over. I recall my husband squeezing my hand but everything else was just a blur. All I remember is thinking I can’t die. I can’t leave my son.

I was diagnosed with Triple Negative Invasive Carcinoma that was rare, more aggressive and most likely to metastasize than other types of breast cancer. The prognosis was not always the best. My only option of treatment was 6 months of Doxorubicin chemo, otherwise known as the Red Devil, partly due to its color but also the fact that it was the most potent chemo there was and then depending on how I responded to it to undergo a bilateral mastectomy.

I had recently done a course in Cognitive Behaviour Therapy and I genuinely believe that it saved my sanity because I started using the tools I had learned to find a positive for everything I was going through. Of course saying this and doing it are two very different things, especially when the situation is so bleak. My first reaction was to join a Triple Negative Survivors Group and focus on all the women who survived this cancer, which meant I could too and that instantly gave me hope. This is what I held onto throughout my whole treatment.

While I was devastated and shell shocked at my diagnosis I knew that the only thing I could control about what was happening to me was how I responded to it. My doctors at Icon Cancer Care were the best in their field and I had access to the world’s top healthcare system. That made it easier to leave my treatment and care in their hands and devote all my energy to finding hope and joy in what was the darkest period of my life.

For the first few days after my first round of chemo and just when I thought maybe it wasn’t going to be as bad as I was warned it might be, chemo destroyed me.

I started experiencing nearly every side effect listed under the drug, nausea and vomiting, compromised immune system, hair loss, fevers, diarrhea, hives, mouth ulcers and extreme fatigue. This led to my oncologist admitting me into hospital after every chemo where I would spend a week being pumped with steroids, Neupogen injections to treat neutropenia and prevent deadly infections, and bags and bags of IV fluid.

I would then go home where I would spend a whole week in bed with pure exhaustion. My son was not able to go to daycare because I couldn’t be exposed to any colds or illnesses that kids come home with so my mum came over from New Zealand to stay with us and help out. Just when I would start feeling strong and physically ok it would be time to do it all again. I had to have weekly blood tests to check my blood count and see if I was able to have chemo and despite taking every precaution I ended up in ICU due to Yersinia Entercolitica, a common bacteria from uncooked food that caused the infection I had been desperately trying to prevent.

This went on for 6 grueling months, and I often felt like I was in hell. My mind was purely in survival mode so I kept telling myself that just like other bad times in my life that this too would pass. I found courage and determination I never knew I had by always believing that tomorrow would be a better day and somehow it always was.

After undergoing a bilateral mastectomy, I was told that while the tumor had decreased significantly, I didn’t have a complete remission. I was required to undergo 25 rounds of radiation to make sure they wiped out any microscopic cells some of which had affected my lymph nodes that ended up being removed.

I naively thought that after chemo, radiation was going to be so much easier and decided to just get it out of the way by having two sessions in a day several times a week. Lets just say that I do not recommend it and it was by far the most irrational decision I have ever made because it resulted in a very burnt and scarred chest that unfortunately still has not healed and probably never will.

As a result of that decision my road to recovery became quite complicated when 6 weeks after my reconstruction surgery my scar split and my implant had to come out. Unfortunately this caused a severe infection that required 4 months of back-to-back intravenous antibiotics, which meant more stay in the hospital.

I always believed that we are ever given one day in life and that everything else was a bonus so finding out that I might die made me so much determined to live and make every single moment count. The only way for me to do that was to surround myself with love and happiness and show people that no matter how dark life got it would be so much easier to bear if we remembered and focused on the joy and blessings of the smallest things.

I laughed when my husband asked me not to die because he really didn’t want to get married for the 3rd time and when he said that he could finally say he was the better looking one in our marriage. We laughed when both of us with bald heads (his not by choice) walked into our son’s room and asked him which one was mummy and when I tried on every wig in the shop just to workout what color would suit me when my hair grew back.

Was I in denial? Possibly, but for me it was the only way I knew how to survive. I wasn’t going to cry about my hair, or my breasts, it was just my exterior and there was nothing I could do about it. I couldn’t change it, so I found other ways of reminding myself that inside I was still me.

I had always wanted a tattoo and breast implants but I was terrified of needles and surgery which put a stop to that plan so I found it quite ironic that I ended up with both due to radiation markers and of course reconstruction surgery.

I wore my best clothes to chemo and told myself that the side effects would be like the most horrendous hangover of my life (minus the alcohol), well except for the last chemo when I decided to take a bottle of Moet because I figured the anti nausea tablets were so good that I might as well enjoy the bubbly.

I belted out songs on the oncology ward with Cher’s I will survive being the top favourite and joked with the nurses that my week long stay in hospital was a reprieve from mummy duties and I was happy that I could finally sleep for 8 hours and get out of nappy duties.

The mind does bat crazy stuff to survive.

I was raised in a very close-knit family and while they lived in New Zealand as soon as I was diagnosed my mum came to live with us and my siblings started routine trips over. Whenever they were here I made a conscious decision to be as happy and stoic as I could not because I had to be but because I wanted them to see hope just like I did and to know that regardless of what I had to go through I was going to be fine. I didn’t want any of them to be sad because my whole life we had always just laughed.  My siblings were the funniest and happiest people I had ever met and whenever we were together life was epic. I recalled all the things we had done together throughout our lives and hung onto those for as long as I possibly could.

I started talking to women on the oncology ward. Despite being in palliative care, some of them found strength to tell me not to give up and as a result inspired me to start my blog called Cancer has nothing on me which then became Life beyond cancer. I wanted women to know that while inevitably some battles may not be won, cancer was not necessarily a death sentence and many of them would go on to lead a long and healthy life.

That’s not to say that I didn’t have days where I fell apart or got angry at the cards that I had been dealt but they were so far in between and I can honestly say that the more I focused on sharing my story and helping other people the stronger I became.

This year will mark four years since I went into remission and I know that I am now living my best life. I have eliminated worrying about every little thing and spent the last few years on becoming the healthiest person I could be. Over the last few years I have worked with Naturopaths, Biochemists and Acupuncturists to help my body recover from the entire trauma. I researched essential oils, different diets and forms of meditation, which tremendously helped my recovery. I started exercising as soon as I was physically able to, even if it was just ten minutes to start with and now I am healthier than I was before I had cancer. The only difference being that I am in menopause. I still do CBT and I write not just about cancer but everything I have dealt with subsequently and life in general. I surround myself with a small group of really good friends and put all my energy into maintaining the relationships with people who are so precious to me. I work because I love what I do instead of always chasing wealth and spend money on things that nurture my soul and body instead on tangible things that served no purpose to me when I was sick.

It may sound strange but it was only when I thought that I might die that I really learned how to live.